This year took a lot away from everyone and that includes the much awaited annual Habanos Festival that takes place in Havana, Cuba every year. This year was dedicated to celebrate the 55th Anniversary of Cohiba and was predicted to be a grand gala event.

However, Habanos used this time to accommodate and innovate and therefore inaugurated the first of many Habanos World Days to come. The Habanos World Day announced the launch of new brands, gave virtual tours of the tobacco plantations, Cigar Factorys and even the La Casa Del Habanos Franchise. There was a Quiz on how well you know the Habanos brands as well as a virtual meet and greet of supporting brands like St Dupont and Zenith, the watch makers.

My favorite bit though was the master pairing videos by world renowned Habanos Sommelier and decided to share the same here for all those of you who missed it.

The first pairing was introduced to us by the Chairman of Sommeliers Association, Cuba and Master Sommelier, Juan Jesus Machin who paired the Cohiba Behike 56 and the Ron Maximo Extra Anejo Havana Club.

Let me start off by saying that hearing Juan talk about Cigars is like Poetry. Watching him smoke one is pure joy. Juan started by introducing the exclusive Cohiba Behike 56 and stating its organoleptic properties.

After smoking the cigar for about 10 minutes, he introduced the pairing that he calls a match made in heaven. The Ron Maximo Extra Anejo Havana Club

The balance, pleasure, harmony and integration of the two is said to be superlative

Conclusion: The liquid taste and aroma of the island is a must have. Maybe, it could be next year when you visit Havana yourself for Festival Del Habano.

It always does me proud to see women making it big in a man’s world and that’s what Manuela does with her immense knowledge and excellent pairing choices between a Cohiba Robusto and Havana Club 15 years.

The pairing was chosen by her as they both boast the natural products that have been grown under the Cuban sun. Keeping in mind the effort and diligent process that goes in to create both the Cohiba Robustos and the Havana Club, Manuela goes on to talk about the pairing as she smokes and how the cigar and the rum complement each other at various stages of smoking a cigar.

The first third: The Cohiba Robusto offers a subtle smoke with cedar, walnut, cardamom and nuances of white pepper paired with a slightly chilled rum which heightens the sweetness of the rum and the natural warmth of the rum gives the pairing a freshness

Second Third: The smoke widens and showcases dry and bitter notes of tobacco and its natural woodiness. The sweetness of the rum which has pronounced flavours of raisin,  caramel and jams complements the dryness of the cigar beautifully. It is an art to balance flavours and the second third does that with grace.

Last Third: The tobacco strength increases and notes of the pepper are emphasized and so are the roasted cacoa notes in the Havana Club. Together they make for a mix of flavours of sour cherries, bitter almonds, dates and vanilla.

His main focus was to educate and teach us instead of tell us, how to taste. With his vast knowledge in not only cigars but also rum, he goes on to explain how to cut, light and taste the cigar.

In the first third, he picked up individual notes that would start to define the cigar which he notes as sweet with woodiness and flavours of nuts.

In the second third, he instructs us how we now should focus on the blend of the cigar. This is where he starts to pair it with the Havana Club Tributo 2021. When it comes to tasting the spirit, you sip it to confirm what you found on the nose.

In the last third, he spends some time talking about the strength of the cigar. Since both the rum and the Cohiba have a sweet after taste, it wraps the tasting experience perfectly leaving you wanting more. 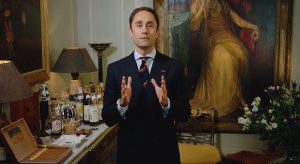 I, personally am so glad that I got a chance to experience their masterclass and only hope to do so again next year at the Habanos Festival in Cuba.